For more information on AaroniaUSA Drone Detectors or Real Time RF Analyzers, call us now at 214-935-9800 or email us today at sales at aaroniausa.com.

Early in 2016, AaroniaAG (Germany-based manufacturer for AaroniaUSA) launched the new SPECTRAN V5 RF Spectrum Analyzer series, accompanied by the World’s Fastest Real Time Spectrum Analyzer Software Suite, the RTSA Suite. As the newest (and by far most impressive) addition to the Aaronia product line matures, many software updates and bug fixes have taken place to ensure that the RTSA Suite stands up to its prestigious “Fastest and Best” title. END_OF_DOCUMENT_TOKEN_TO_BE_REPLACED

To kick off our annual Year-End Clearance Event, Aaronia USA is excited to announce that we will now be offering Overstock and B-Stock Clearance items on our eBay account XXX. Products available for sale from this account include new, unused items that may have minor cosmetic damage, may be missing insignificant pieces of the original packaging (small foam inserts, plastic wrapping, etc.) or general warehouse overstock items, and will be offered at a significant discount from our suggested retail price. Additional products listed may be overstock parts and accessories, both related and unrelated to our full line of RF test and measurement equipment. END_OF_DOCUMENT_TOKEN_TO_BE_REPLACED

Aaronia USA, the exclusive North American distributor of Aaronia AG RF and EMC test and measurement equipment, is thrilled to announce the expansion of our External Pre-Amplifier product line to include three new models. Previously, this line included two models of high-gain, low-noise 40 dB pre-amps in frequency ranges from 1 MHz – 1 GHz and 1 kHz – 10 GHz, as well as two models of low-frequency pre-amplifiers in frequency ranges from 1 Hz – 50 MHz. All AaroniaUSA low-noise amplifiers feature internal batteries (with typical run-time of 3-4 hours) and excel at “digging out” weak signals to guarantee accurate signal analysis even with outdated spectrum analyzers. The new pre-amplifier product additions address the limited frequency ranges and shorter battery lives of the previous models, with upgraded microchip technology and an expanded internal battery. END_OF_DOCUMENT_TOKEN_TO_BE_REPLACED

Update your Spectran Analyzer Firmware at Germany-based manufacturer, Aaronia AG, website Aaronia.com. Please note that the video indicates firmware updating for the V5 only. Please see below for instructions regarding updates for ALL MODELS of Aaronia USA spectrum analyzers. For more information on Aaronia USA Spectran V5 RF Spectrum Analyzers or for technical support during firmware and software upgrades, contact sales at aaroniausa.com or call 214-935-9800 now! END_OF_DOCUMENT_TOKEN_TO_BE_REPLACED

RF and EMC protection is necessary for multiple applications, including interference prevention, test and measurement, shielded chambers, and personal health and safety. With countless varieties to choose from, and some better suited for certain applications, it can be a challenge to select the right RF screening or dampening material for your needs.
END_OF_DOCUMENT_TOKEN_TO_BE_REPLACED

History sometimes repeats itself. On July 28th 1945, a B-25 Mitchell twin-engined bomber crashed into the 79th and 80th floors of the Empire State Building in New York. On February 4th 2016, the same skyscraper received a second aircraft hit when an unmanned aerial vehicle (UAV) crashed into the building’s 40th floor. In the first case, a US Army Air Corps pilot had become lost while flying in thick fog. In the second incident, a private citizen lost control of the UAV he was flying, and later went to the Empire State Building in the hope of reclaiming it. No one was hurt, but the UAV operator later pleaded guilty to a charge of disorderly conduct.

It was one of around 600 drone incidents that have been recorded by the US Federal Aviation Administration (FAA) over the previous six months. Civilian-operated UAVs are a problem that is getting worse- on April 17th 2016, a British Airways Airbus A320 making it’s final approach to London’s Heathrow Airport was reported to have struck a UAV. Two months earlier, an A320 that had just departed from Heathrow Airport had a near collision with a UAV. An official report later stated: “The entire event asted no more than three or four seconds, making any evasive action virtually impossible.”

That statement summarizes a major problem- how do you swiftly and reliably detect a flying object so small that it has minimal radar signature? A solution is urgently needed. 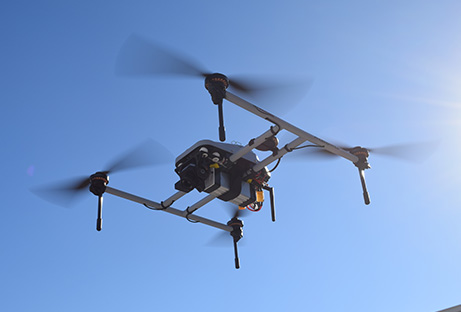 Durable and lightweight, the antenna gain increases with frequency up to a maximum of 13 dBi. The PowerLOG 10800 and 70180 are suitable for both transmitting and receiving purposes. Due to the very high maximum transmission power capability the PowerLOG is especially suitable for EMC and immunity test measurements. For more information, including application notes and purchasing, please contact sales at aaroniausa.com or call now 214-935-9800

Aaronia USA has introduced the new Aaronia ultra-broadband OmniLOG™ 70600 compact omnidirectional antenna which covers an extremely wide frequency range of 680 MHz to 6 GHz with very high gain of up to 6.5 dBi. It is adapted to be used with the SPECTRAN handheld RF spectrum analyzers, but can also be used with any other RF spectrum analyzer brand. The antenna sells for $499.

The frequency range covers the following, typical signal sources: GSM, CDMA, LTE, WiFi, 900 MHz and 1.9 GHz ISM, DECT, Bluetooth, 5GHz WLAN, WiMAX. The antenna offers a heavy-duty 90∞ knuckle base with SMA connector. The knuckle base is freely adjustable into each position and fixed by two precision ball pressure screws. The OmniLOG antenna offers an omnidirectional measurement of field strength without the need to move the antenna to the source.

Aaronia Smart RF-Generator up to 6GHz

Watch A Demonstration Of The Spectran Analyzers and Antennas